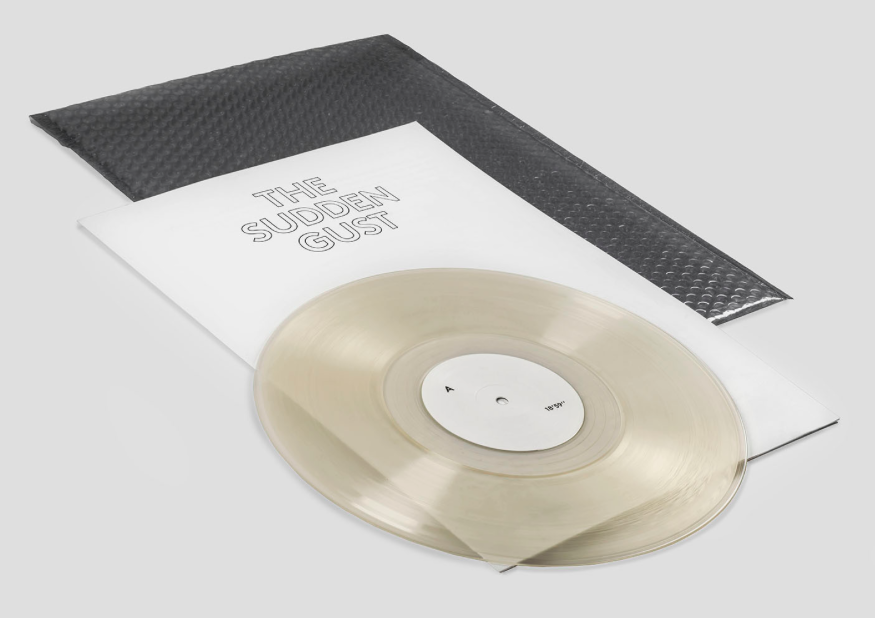 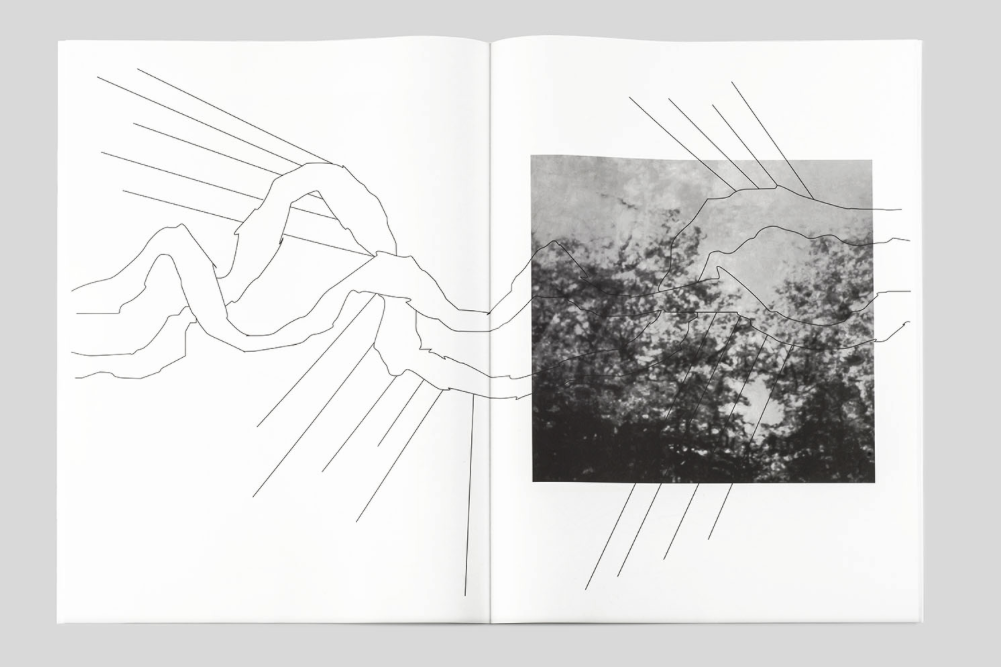 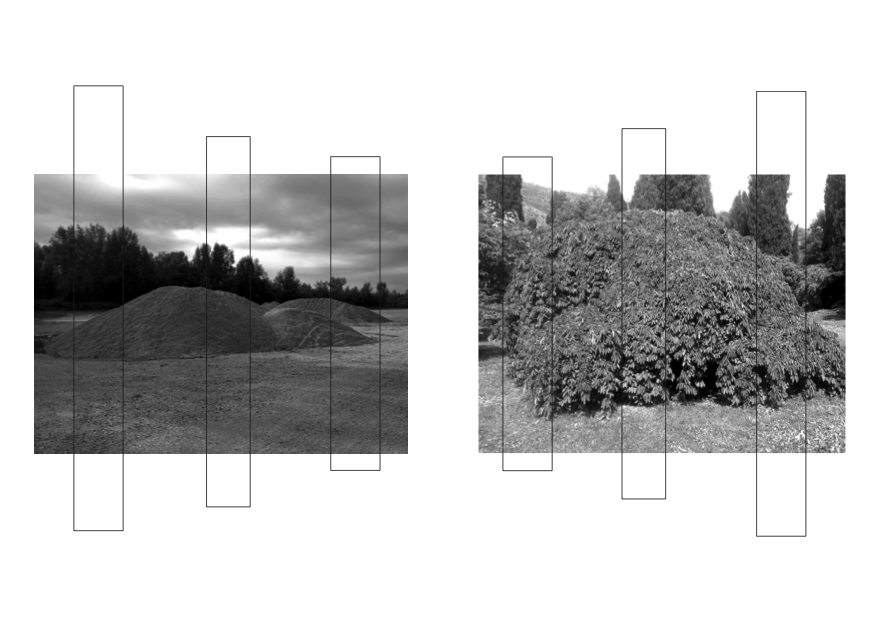 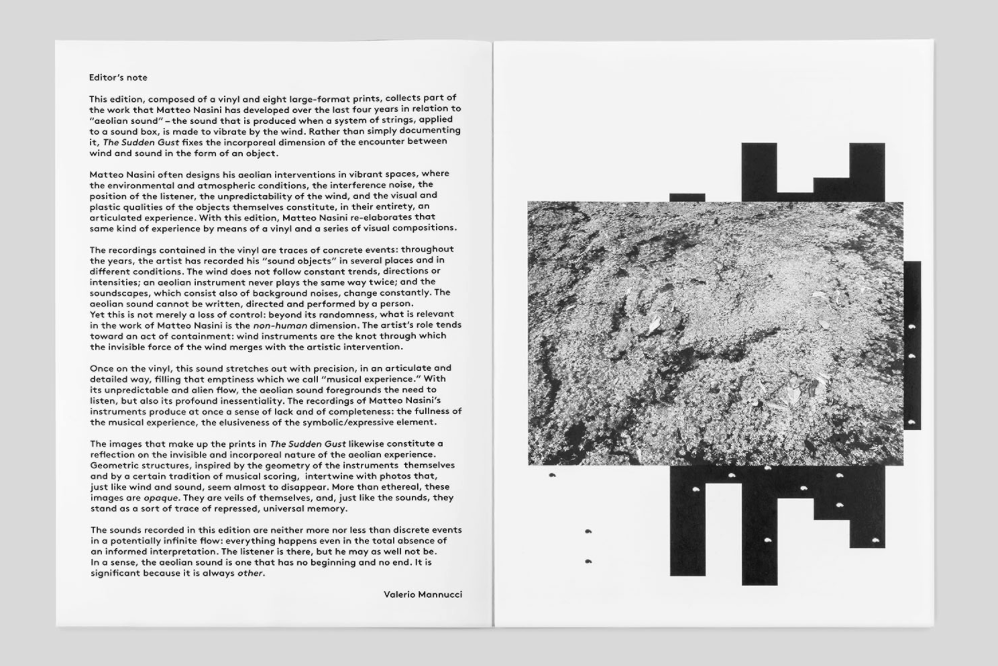 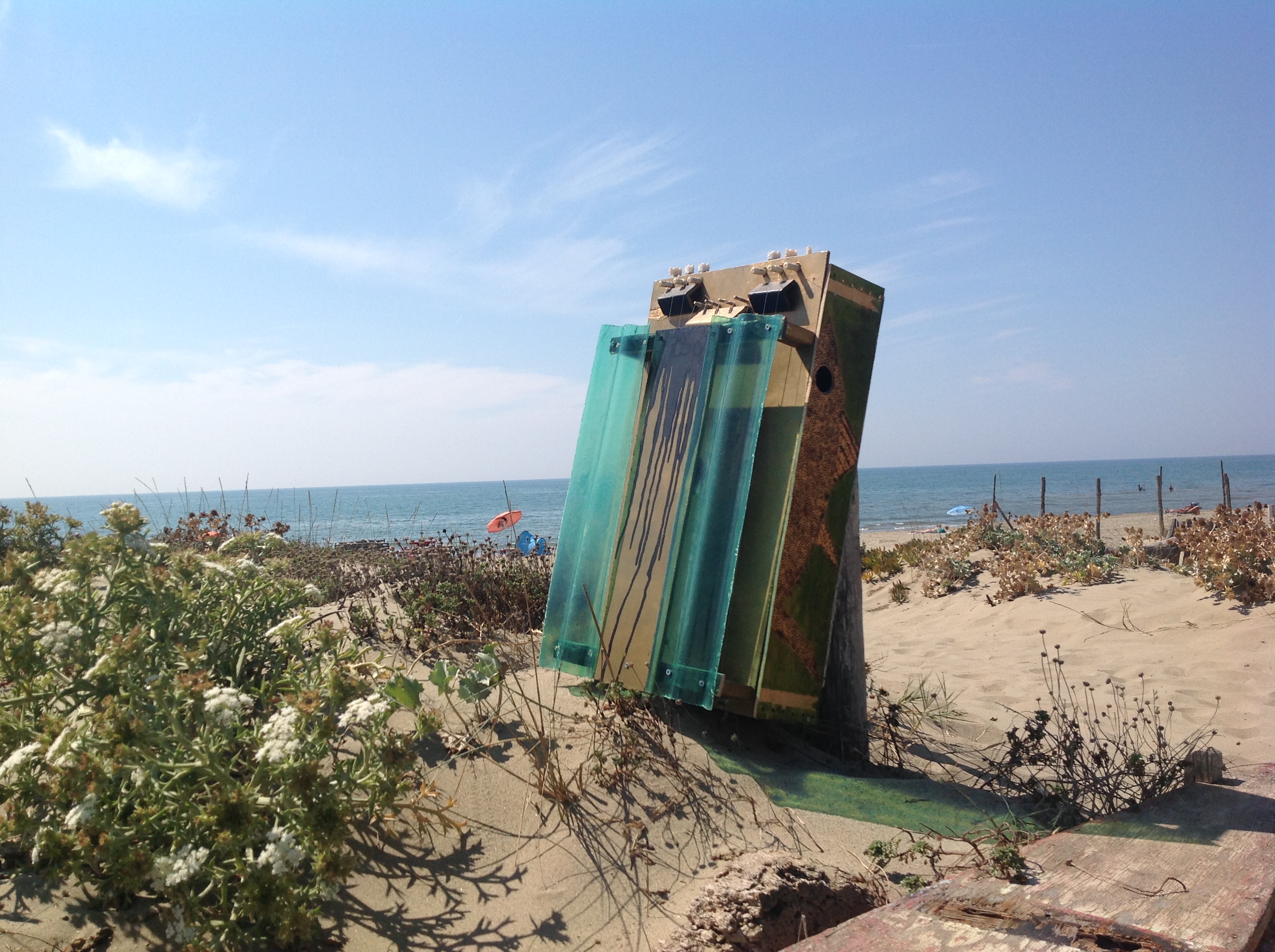 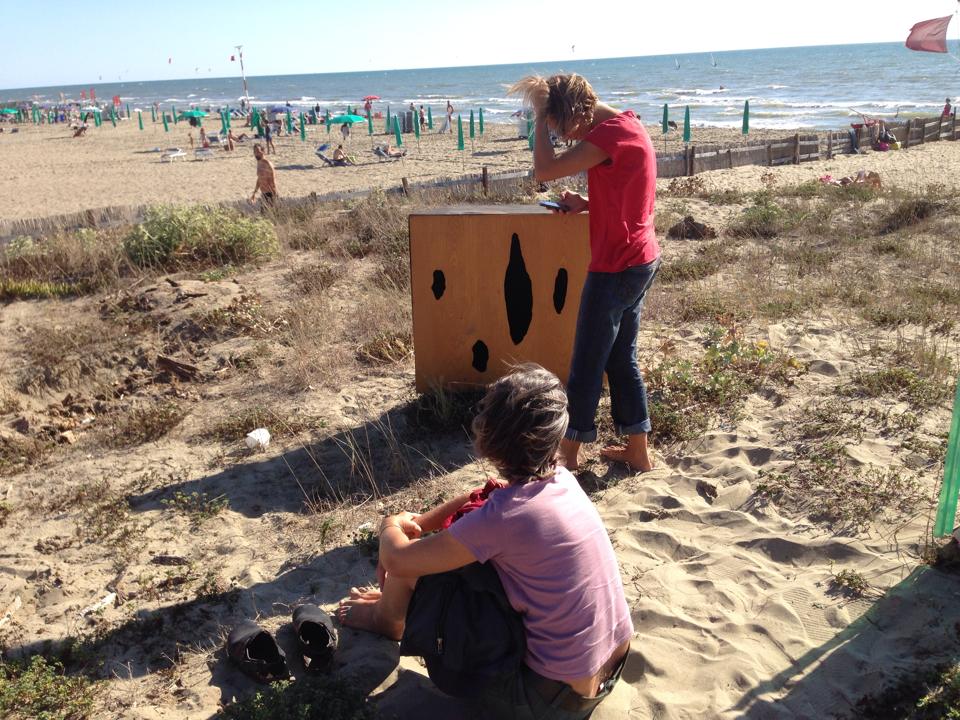 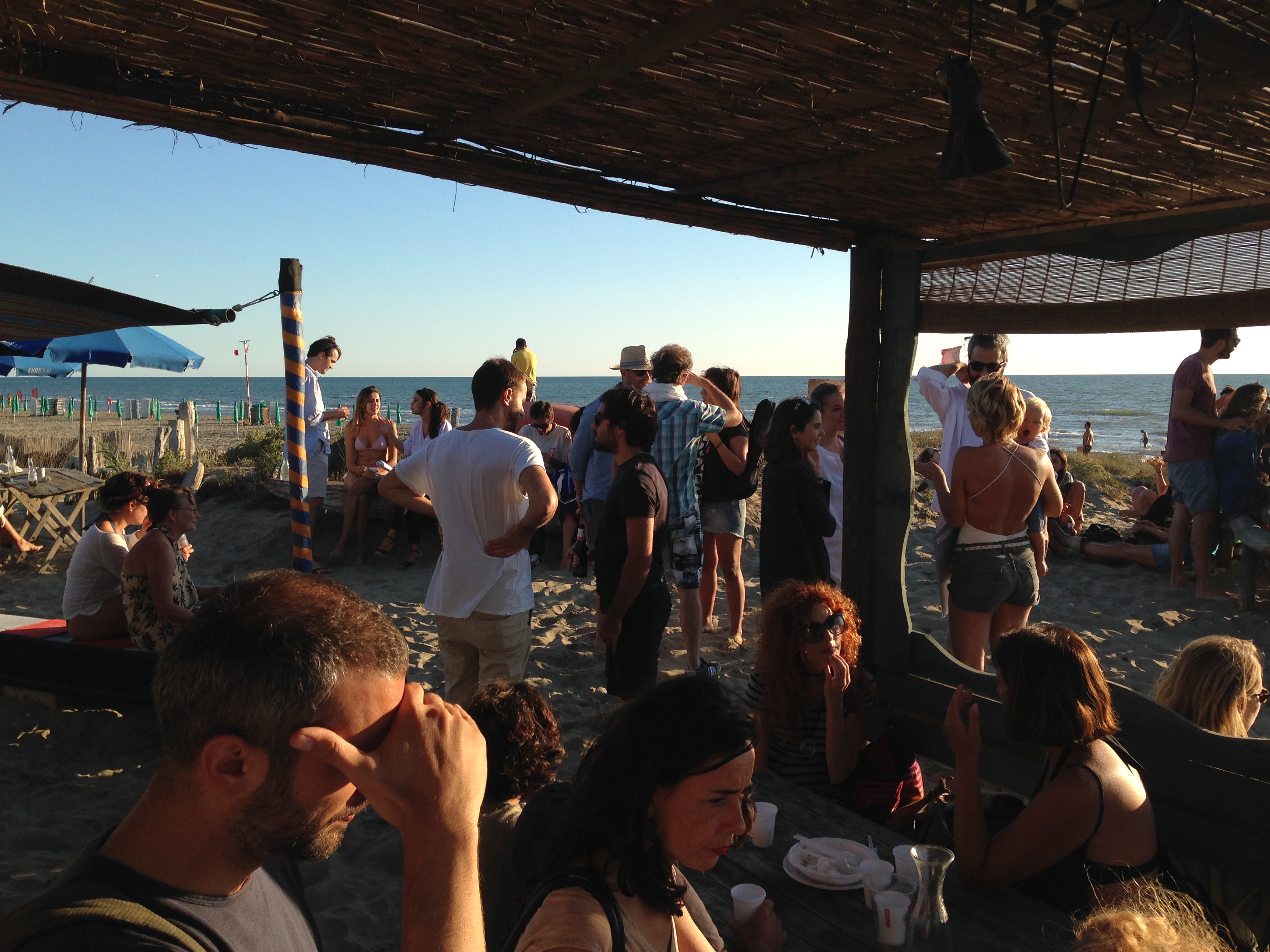 This edition, composed of a vinyl and eight large-format prints, collects part of the work that Matteo Nasini has developed over the last four years in relation to “aeolian sound” – the sound that is produced when a system of strings, applied to a sound box, is made to vibrate by the wind. Rather than simply documenting it, The Sudden Gust fixes the incorporeal dimension of the encounter between wind and sound in the form of an object.
Matteo Nasini often designs his aeolian interventions in vibrant spaces, where the environmental and atmospheric conditions, the interference noise, the position of the listener, the unpredictability of the wind, and the visual and plastic qualities of the objects themselves constitute, in their entirety, an articulated experience. With this edition, Matteo Nasini re-elaborates that same kind of experience by means of a vinyl and a series of visual compositions.

The recordings contained in the vinyl are traces of concrete events: throughout the years, the artist has recorded his “sound objects” in several places and in different conditions. The wind does not follow constant trends, directions or intensities; an aeolian instrument never plays the same way twice; and the soundscapes, which consist also of background noises, change constantly. The aeolian sound cannot be written, directed and performed by a person.

Yet this is not merely a loss of control: beyond its randomness, what is relevant in the work of Matteo Nasini is the non-human dimension. The artist’s role tends toward an act of containment: wind instruments are the knot through which the invisible force of the wind merges with the artistic intervention.

Once on the vinyl, this sound stretches out with precision, in an articulate and detailed way, filling that emptiness which we call “musical experience.” With its unpredictable and alien flow, the aeolian sound foregrounds the need to listen, but also its profound inessentiality. The recordings of Matteo Nasini’s instruments produce at once a sense of lack and of completeness: the fullness of the musical experience, the elusiveness of the symbolic/expressive element.

The images that make up the prints in The Sudden Gust likewise constitute a reflection on the invisible and incorporeal nature of the aeolian experience. Geometric structures, inspired by the geometry of the instruments themselves and by a certain tradition of musical scoring, intertwine with photos that, just like wind and sound, seem almost to disappear. More than ethereal, these images are opaque. They are veils of themselves, and, just like the sounds, they stand as a sort of trace of repressed, universal memory.

The sounds recorded in this edition are neither more nor less than discrete events in a potentially infinite flow: everything happens even in the total absence of an informed interpretation. The listener is there, but he may as well not be. In a sense, the aeolian sound is one that has no beginning and no end. It is significant because it is always other.